(Original notebook can be found in this gist)

In this post we shall try to run a quick experiment with the intention of convincing ourselves that \(t\)-test works. We will examine what is the underlaying distribution of many different samples obtained from many different distributions. Furthermore, we will see how the size of the sample influence the reliability of the test.

Hypothesis: a statement about a population parameter. A population may be the users' traffic and the parameter may be conversion rate.

Objectives: given sample taken from the population, decide whether the null-hypothesis (\(H_0\)) holds or not.

Does the mean of the underlaying distribution equals to \(H_0\)?

So, next, we compute the mean of the sample. At this point, we should use the statistical test and answer the question.

Let us set some parameters:

In this experiment we fix \(H_0=\)} and we apply the \(t\)-test on various samples obtained from different normal distributions. For simplicity, we use fixed STD for the distribution and varying means. 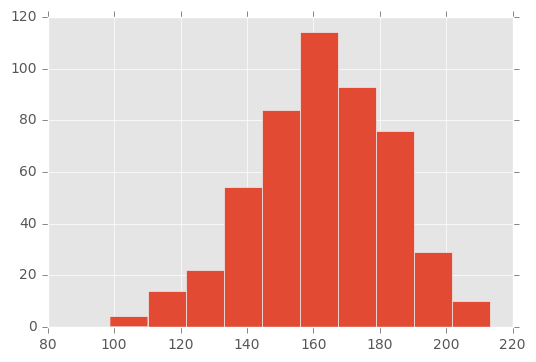 One may guess, based on the visual observation, that the sample was obtained from a normal distribution with mean between \(150\) and \(170\). Which is indeed the case, the mean was \(163\). But, how can be test it rigorously?

More intuitively, if the label is \(0\), we can claim that mean of the distribution from which the sample was taken is not \(0\).

In the above graph, every red cell corresponds to a \(t\)-test of a sample with given size obtained from a normal distribution with given mean.

We see, that the bigger the sample is, the more accurate the test is. Still, starting from a sample size of 50, we already manage to reject about \(2/3\) of the samples. It gets much better the denser the sample is.

In general, the smaller the sample, the more likely it is to accept the null-hypothesis even when it is wrong; see sample size of 10 and mean 148. However, the bigger the sample, the more precises the test is; i.e. we correctly identify whether the underlying distribution has a mean equals to \(H_0\) or not.